Hi, internets. Sugar wants to go to bed awfully soon, because for some reason she isn’t excited by the prospect of the time change meaning Graham will want to get up for the day at 3:30. De gustibus non disputandum, amirite?

This storm business…it’s so strange. Here we are, high and dry, living pretty close to our regular lives, and yet I feel so upset and stressed out so much of the time. It feels ridiculous and self-indulgent to say that while we are FINE and others are so very not fine, but it seems nevertheless to be the case. Partly, I suppose, it is the sense of vulnerability, partly the isolation I have mentioned before. It’s unsettling, and it’s easy to get sucked into doing nothing but mainlining news reports.

This afternoon, in the interest of maintaining sanity and all that, we took the Bean out for a walk in the Botanic Garden and the small zoo in Prospect Park. The damage at the garden was real but not horrifying, and the zoo was pleasantly normal. The Bean pointed out the geese, studied the red pandas at length, and seemed rather taken aback at the size of the goats, after requesting to see them. He’s been talking about goats (or “gooots”) a lot these days, but off the page, they are uncanny creatures, what with their horizontal pupils and all.

We also visited the monkeys and a pair of small African owls. I love to hear the Bean say “owl.” He gives both syllables a solemn weight, OW-WUL, which seems to suit their regal bearing, the way their eyes inspire true awe, the paralyzing kind, such that looking at them, we remember for a moment how it feels to be prey.

At bedtime, we read parts of Joyce Sidman and Rick Allen’s The Dark Emperor and Other Poems of Night, a magnificent book of poems and gouache’d linoleum prints of the natural world at night. I’m linking here to the Google Books page, so that you can get some sense of the illustrations. They are even more lush and intriguing than they appear on screen.

The Dark Emperor is an owl, and the poem devoted to him, a hymn of almost religious terror in the voice of a mouse, who begs the owl overlook its teacup of a heart. (Is that the line? I’ll have to check tomorrow; the book is with the sleeping Bean.  ETA: It’s “tiny hiccup of a heart.”  That makes more sense, but I liked my invented metaphor, the mouse’s heart delicate as china, shaking, threatening to spill the tea.) It is one of my favorites, a rare shape-poem that is such a good poem on its other merits that I only tonight noticed the words forming themselves into the omnipresent shadow of the owl.

My favorite poem in the book belongs to an orb-weaving spider, who delivers methodical, liberating life advice. I didn’t realize until searching for it online tonight that it feels so familiar because I read it first on Unwellness. That Briar knows what she’s about, I’ll tell you. Rather than copy and paste it here, I’ll direct you to it on her page, so that you may discover both a deeply satisfying poem and a great blog, in one click. 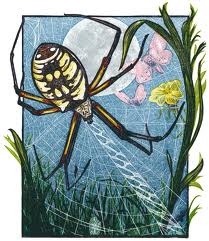 Hey, y’all. How in the world are you?

Sorry to be so out of touch in the past couple weeks — I spent the week of the GI/Endo/Black Eye reading everybody’s blog like crazy but too worn out to type comments, and then something went haywire in my brain and I spent this week too depressed to even read.

So…hi. I’m back. I’ve diagnosed myself with a critical chocolate deficiency, and the treatment seems to be helping. That, and I can feel my body getting closer to ovulating, which, while increasingly a time of emotional complexity, is generally the happiest time of the month for me. (We’ll save my rant about how little I like the idea that body chemistry is in charge of my worldview for another day, shall we?) I’m also pleased to report that for the first time since its date with the bookcase, my right eye is as sharp as my left, which has improved my worldview in a very literal sense.

BUT. That is not what I logged on to say. Rather:

Perhaps you have heard about wonderful Weebles Weblog’s Limerick Chick Contest, for which folks have been writing witty verse about other blogs. I had hoped to enter for myself, but, well, see above.

It has come to my attention that Kym — Kym, who has only lately organized the sensational Sock It To Me exchange (to say nothing of convincing poor, long-suffering Frank to trade his dignity for donations to the Parenthood For Me benefit) WHILE AT THE SAME TIME kicking infertility’s ass for not just herself but now others (others! I can hardly stand the thought of doing this for myself!) as a surrogate — that Kym, the Kym we’re in awe of, has written a limerick about Our Own Little Blog.

Well. It’s enough to force a girl not to be depressed, that’s what.

So please, head over to Weeble’s and vote for Kym’s poem. Here’s why you should vote for Kym (besides your devotion to her and your bemused interest in your humble servant, of course):

I don’t mean to be more of a snob than usual, but it’s a LIMERICK contest. We all love couplets and quatrains and even free verse, but these are not limericks. A limerick, to quote from Roy Blount Jr.’s Alphabet Juice, maybe my favorite book about the English language (and this is saying something for a nerd like me I am) is:

“…two lines of trimeter (three feet) followed by two of dimeter (two feet) with a different rhyme, and one more of trimeter returning to the first rhyme. Generally the intended effect is spicy. For example:

There once was a lady named Dot
Who said as we found a nice spot,
“I never undress
at a picnic unless
It’s warm, and it is, so why not?”

(In his section on meter, Blount exhorts the writer lost in the drudgery of writing to ask, “WWJMD? What would John Milton do?” I think it’s pretty obvious that John Milton would forsake the dreariness of vanilla metric-less freedom for the enlivening strictures of poetic submission. Ahem.)

I am not an un-reserved fan of slant rhyme, which can be only laziness on the poet’s part. However, when slant rhyme serves to emphasize the almost-rhyming word and that emphasis adds meaning or interest to the poem, I’m all for it.

The almost-rhyming word in Kym’s poem is “vaginas.”

3. Kym’s poem has more vaginas than any other poem.

“The intended effect is spicy”

I can’t think why you’d need another reason to vote for her; go to it.