Hey, internets. Boy, do I have lots to unload on you. But I am also on one of those visiting-family “vacations” where everything is mysteriously more work than it is at home. And Jackalope is teething her brains out. So just a quickie today.

It’s World Breastfeeding Week, apparently. My Facebook feed is all over boobs and babies. Which is lovely, I guess. I mean, yay for these folks. Yay for whatever makes it easier for people who are socially discouraged from breastfeeding to feel they have permission to give it a go. Class and race divisions being what they are, I am just guessing that most people on my feed probably feel more pressure to breastfeed than to use formula, but whatever, yay normalizing, yay boobs, etc.

Somehow, though, I never feel like these events are quite for me.

Some of that is certainly complacency, a complacency that I certainly hope will soon exist for everyone, not just highly educated, middle-class white ladies in gentrified urban areas. No one has ever particularly hassled me about nursing, in public or not. A few women of my mother’s generation expressed very mild surprise at how long I nursed the Bean, but nothing approaching disapproval. The sleeping car attendant on our train here about jumped out of his skin when he poked his head into our room and saw my exposed breast, but he probably thought he was intruding. I did have one creepy guy taking pictures (or possibly using binoculars?) in the early days with the Bean, which was gross as hell, but I was in fact quite covered in blankets at the time. (It was COLD, y’all.) Since I couldn’t pump for the Bean and haven’t yet dealt with returning to work post-Jackalope, I haven’t had to deal with space and time for pumping, either. Breastfeeding has not been easy for me, but the difficulties I’ve had with people (Dr. Russian and pals) have been about crap medical care, not disapproval per se.

Some of my ennui about the whole deal is lingering shame/guilt over my less than picture-perfect nursing relationship with the Bean, since the photographic cavalcade can feel rather like a public parade by members of the Pure And Correct Mothering Club, but the sense that I don’t deserve to say I really breastfed the Bean has faded a bit. I don’t always feel compelled to add the asterisk that our early relationship wasn’t technically exclusive because of that week of formula supplements. Sometimes, but not always. That I didn’t pump for him when I returned to work at six months ended up having the real silver lining of protecting me from way numbers and pseudo-industrial processes can feed an obsessive relationship with The Device, until the pumping itself, odious though it may be, becomes hard to let go of. (Not you, not you. If you pumped until 36 months and felt happy and free about it, cheers. I am not a laidback soul once numbers are involved. Possibly not ever, but at any rate, numbers and records make it worse, and I’d probably still be pumping for the Bean, if I’d really gotten started. It’s easier, in a sense, to wean from actual nursing, since there’s another person directly involved and potentially contributing to the decision.) Heck, the way he eats these days, formula is starting to look like one of the better foods he’s consumed. I feel sympathy for women who do feel excluded by that aspect of WBW, but I no longer feel quite so convinced that I am supposed to feel excluded, myself.

Anyway, my record is far more pure with Jackalope (though by any sane measure, the Bean did okay, too: all-but exclusively breastfed in the beginning, weaned by mutual assent at 21 months). No supplements needed for her, and the way she’s taking to food, we may just have her eat that and drink water during my absences at work. I’ve been able to pump occasionally without pain, so I could give that a go, but really, I don’t want to. She has had one bottle of formula so far, after she’d already begun trying foods. Or rather, she’s had half an ounce, which she threw an almighty fit about, and was then screaming with apparent constipation that night, all because I was having a nervous breakdown and Sugar took her out for an hour. Whole thing made me feel like Mother of The Year, but I digress.

The thing is, even though I am one of the “good” or maybe “lucky” ones according to the boob boosters, one who “succeeded,” I just…don’t like it all that much. I don’t hate it, the way I did when the Bean was tiny and the spasms were at their worst, but neither do I feel inclined to carry on about how beautiful and fulfilling and profound the whole deal is. It’s okay. It’s marginally easier than carrying around bottles and powders, though that doesn’t seem so daunting now that I carry food for my picky Bean everywhere I go. It’s nice that I can feed her without getting out of bed, but that convenience is tempered by the fact that I’m the only one who can feed her, lately every hour all night long. I can nurse her to sleep, but she’s less willing to fall asleep in a carrier on my chest, because I smell of milk. I’m all for sharing my antibodies, but I’m skeptical of many claims of breastmilk’s superiority — except that apparently it doesn’t constipate this particular, easily backed up baby. I suppose it may have slightly delayed the return of my period (though not by much), but I weigh as much as I did a couple of weeks after her birth. My blood sugar remains almost as prone to crashing as during pregnancy, maybe because I forget to account for all the calories I’m losing in the middle of the night.

In a sense, I suppose I am the picture of someone for whom breastfeeding has been successfully normalized. Advantages and disadvantages are pretty balanced for me, but I do it anyway. I am certainly subject to the pressures of my particular peer group, but I’m not consciously impressed by the scare tactics. I can keep nursing without vilifying formula companies, because their existence and marketing doesn’t feel threatening to me. (NB: I am speaking only for my own race/class/education/geographic position. I know the spiel, I promise.)

What I don’t feel especially moved to do is wax poetic about how beautiful it is, because I don’t find it especially more beautiful than other ways of relating to my children. I value feeling physically close to them, but I value it much more when I am sure it’s not just the affection I feel for my refrigerator. When the Bean comes to sit next to me on the porch swing here, when Jackalope, in a recent development, rests the SIDE of her head on my chest, that makes my heart swell. Jackalope latching right on in the delivery room was a great relief, because it suggested she might avoid the Bean’s early difficulties, but I also love watching her chow down on applesauce; she makes this kind of raptor shriek and launches herself bodily at the spoon. Likewise, it does my heart much good to see the Bean eat a pancake I have cut into his requested shape. “I want one shaped like Mama holding Jackalope,” he says, and, calling upon the spirits of Mary Cassatt and Kara Walker and Julia Child, I feed him. 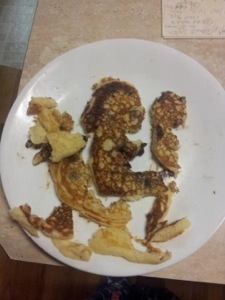