Well, it only took two hours to get Jackalope down for this nap. Here’s hoping it lasts more than twenty minutes.

Jackalope is nearly five months old now, though I can scarcely believe it. The usual feels like it’s been no time at all and she’s always been here thing. Brains are funny. At any rate, she had her four-month check up and shots recently. (We got a bit behind schedule trying to be sure we always see our favorite doctor at the practice. I should never have recommended her to so many people.) She did very well, agreeably stretched out for her length measurement, didn’t scream on the scale, and, in the scheme of things, didn’t cry all that much about her shots, at least not at the time. (Thank you, God, for ibuprofen. And also vaccines.) In this she was perhaps inspired by her brother, who was himself due for the jab I had promised him he wouldn’t get at his three-year appointment (never do that), which the doctor agreed to delay so he would not have been lied to. He made nary a peep, and requested that he and his sister have matching bandaids.

He is going to heartbroken when this thing falls off.

We’re gathering all the paperwork for Jackalope’s second parent adoption, so I stopped at the front desk for the letter attesting her good health, the printed record of vaccines and measurements. Eighty-eighth percentile for length! Down from 90th, but still — do you have any idea how short I am? And 21st for weight. Not bad, right? For a kid whose brother scraped the bottom of the chart for so long? Try telling that to my addled brain.

See, the Bean wasn’t always at the bottom. In fact, he was middle of the road until four months, when he started his drop. The numbers didn’t get very low until six months. And Jackalope was at 60th at her last visit. And her head circumference had plummeted, too, from 25th to 7th. I don’t even know what that means, but surely nothing good. Cue a night of confusing, sublimated panic.

By the time the doctor returned my call, I was calmer. After all, the Bean is fine, he’s always been fine. As my mother pointed out over and over, he always kept growing taller, making hair, making fingernails. These days, he’s not even low on the charts, easily the most shocking news of his three-year visit. I know I’m being ridiculous, I said; I just need to hear as much from you.

The head circumference is almost definitely a mistake, she said. Her assistant does the weighing and measuring, but she usually repeats that one herself because even a half-centimeter error represents a big difference in percentile. We’ll repeat it at six months. As for the weight, she says just what she did with the Bean: this is just the age when my milk is no longer enough and it’s to give her some food. Which is exactly what we’d been talking about in the appointment, after all. She seemed slightly baffled by my concern; I haven’t been a parent who calls a lot. Look, she said, it’s obvious that she’s a healthy, happy, very charming baby. Or maybe that last one was “very smart.” Well calculated to please, at any rate.

This baby is clearly fine.

Indeed, I was slightly baffled myself by this reaction. She really is obviously fine. Sure, the Bean’s weight caused a fair amount of stress during his first two and a half years or so. It’s a lot harder to shrug off the pickiness of a kid who merrily starves himself into sleeplessness, in whom a slight loss of appetite when sick with a cold results in ribs fairly popping out from his chest. Toddlers aren’t meant to have flat stomachs, let alone concave ones. But we did survive, after all, if not without some hard-earned lessons in humility. I tend to think that, like a lot of things in this parenting gig, it wouldn’t be quite as hard the second time. And he’s in the 40th percentile now! Practically robust!

Part of it, I think, was believing things were different this time (as they may yet prove to be). It’s obvious I’ve been making more milk: witness the fact that Jackalope could have those deliciously fat baby thighs despite spitting up so very much in her first few months. (Seriously, child, it’s downright wasteful.) And she seems to take such a lusty delight in eating that I imagined she might be a bit more like her ol’ Ma in the taking pleasure in food department. But that’s hardly the stuff of teeth-grinding, especially since so far there’s not particular indication she won’t be a different kind of eater from the Bean.

It took a few days, but I did eventually figure out where the shaking came from. Not from the Bean’s experience in the period Jackalope is now approaching, but from his early weeks. The weeks of not sucking hard enough, my not making enough milk, all of us shuttling back and forth for all those weight checks, my nearly passing out during the lactation consultant’s talk (two different ones, now that you mention it), the fear that it really wouldn’t all be okay. It was an awful time. But it’s a gauntlet Jackalope has already run. She was fine, just fine. And if we had a third child (not likely), maybe I would eventually stop jumping at shadows that only make me think of it.

Meanwhile, despite nursing my brains out at all times, my own weight remains maddeningly stable, right about where it’s been since a few weeks postpartum. Less than what I weighed at the end of pregnancy, a good deal more than what I think of as my normal weight. Still in the big pants.

This, too, should come as no surprise, since the same was true at this stage in the Bean’s life. In fact, the number on the scale is just about the same, come to think of it, despite my weighing a bit more when Jackalope was born than when the Bean was. And I told myself I wasn’t going to fret over it this time, that I would by God eat oatmeal cookies if my milk supply needed help, rather than wretched, virtuous hot oatmeal.

Easier said than done, I guess. Once again, it feels like everyone loses weight faster than I do. (Who is everyone, anyway? I don’t spend any time with mothers of kids Jackalope’s age, since the Bean’s schedule determines ours.) Sometimes I don’t care or I remember that I didn’t really feel like myself until I stopped breastfeeding the Bean; sometimes feelings of ugliness intertwine with ones of unworthiness, hissing that if I can’t make art or money these days, I should at least pay my rent on the space I take up by being appropriately pretty. I’m tired of the few clothes that fit and allow nursing. And yet somehow, I’m hungry all the time. Go figure.

I’m not sure why I mention all that, except that I’m tired of only reading “success” stories when it comes to losing baby weight. I’m not planning to do anything about it — dieting has an established history of making me lose what few marbles belong to me. But, well, for the record.

In happier news, the Bean has hit a major, major food milestone. Last week, after shall we say expressing extreme frustration with my refusal to get up from nursing the baby to MAKE ME ANOTHER SANDWICH, he marched back into the kids’ room and announced that he was making his own. Great, I said. And, as a lucky afterthought, show me the knives you are going to use for the peanut butter and jelly before you use them.

First knife presented: a butter knife. Enh, good enough. Then the long bread knife. Not so much. Next try: the eight-inch chef’s knife. Good thing we keep that in a blade cover. After more specific instructions on finding the table knives and an assurance that there most certainly was sufficient jam left in that jar, he appeared with this:

GAME. CHANGER. I have never felt so vindicated in my decision to continue to live by the tenets of my personal parenting philosophy, High Quality Neglect.

After the sandwich, he got down the baby wipes and proceeded to wipe down the furniture, including asking me to move the laundry drying rack so he could do the insides of the wardrobe doors. Sure, he neglected to clean the chair he’d actually made the sandwich on. Sure, we found a cheese knife covered in jam in the drawer later and quite a bit of peanut butter in his hair. Details, details. 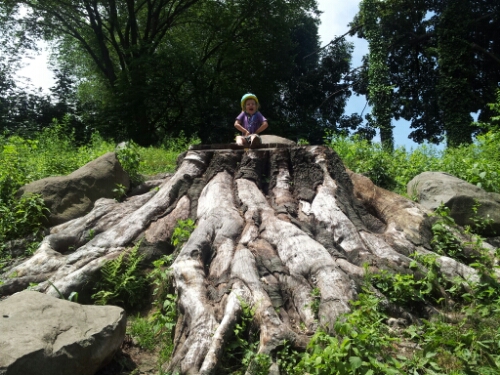