This much-delayed post brought to you by my visiting in-laws, Sugar’s taking a day off work, and my realization that even more than a donut, I would like some peace and quiet, alone in the apartment while everyone else goes to the coffee shop. It is indeed quite sweet.

The long silence, here and in your comments, is brought to you 70% by Having Two Small Children All Damn Day, 25% by How Can I Do Anything If I Don’t Even Know If We Are Moving In A Month, 5% by a mild case of the blue devils. In the 19th century sense, not the NCAA one — can you tell I am reading Patrick O’Brian again? I think I may just plan on slowly cycling through that series for the rest of my life, I like it so much. I’m in my favorite part now, the voyage that is Diane to Southeast Asia, Surprise back, and so far the best bits (Stephan’s orphans; the Edenic crater by the Buddhist temple; the demise of Andrew Wray) are only improved by anticipation.

For the moment, anyway, the blue devils seem to have been put paid by the sheer joy of a week on Cape Cod, celebrating the marriage of two friends. They did the city hall bit in the fall, and rather than having the usual wedding feast, invited some friends and family to visit them at a big house in Wellfleet, hanging out doing the things one does at the beach and cooking big dinners for each other in the evenings. (Maybe I will give you my shrimp and grits recipe one of these days.) It was heavenly. There was a tidal marsh in the backyard, suitable for kayaking on at high tide and chasing fiddler crabs on at low tide. There were other kids, so ours weren’t the principle disruptive force, and plenty of adults used to children, so we got some breaks here and there. All the charm of a family vacation with someone else’s family. We saw whales and no one threw up on the boat, an act of sheer will on the part of the Bean. He caught snails and hermit crabs on the beach and declared a love of being barefoot even when there were clam shell driveways to cross. He also ate his first s’more and huge numbers of “sea beans” from out back, actually some sort of succulent grass that tastes a little spicy and unbelievably salty; Sugar ate her weight in lobster rolls. I had my first oysters and Jackalope her inaugural french fries: we are both extremely pleased. 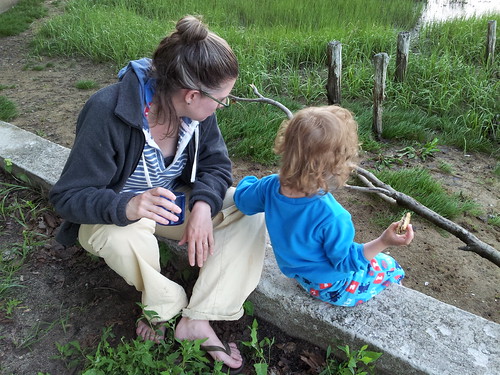 I imagine there may be gasping in some quarters at that news in concert with a glance at Jackalope’s age ticker: she is just over four months, and there is a fashion at present for ritual purity until at least six. When the Bean was this age, plummeting through the weight charts, and his doctor recommended letting him start tasting foods, I know some friends were appalled. My reading at the time suggested there wasn’t much difference in four versus six months for starting foods; the research cited to say otherwise conflates starting solids with ending breastfeeding, which we had and have no intention of doing. In any case, these fries were not her first foods. The Bean, flush with the joy of a “living room floor picnic” (dinner on a table cloth spread on the floor, a speciality of my mother’s, to make up for a rained-out attempt to eat at our community garden), let her taste an apple and a pickle a few weeks ago. “Come on, [Jackalope], get out your tongue….”

She liked the apple more than the pickle, the opposite of the Bean at that age, but Lordy, does she love a french fry. I had intended only to let her touch her tongue to the one I impulsively offered at our post-whale watching lunch in Ptown, but the look on her face! Only a monster could have taken it from her.

In fact, I am pleased at her hunger for fries, for reasons greater than my usual contrariness. When my mother was pregnant with me, she was in medical school. (No, she didn’t take time off, and yes, I am permanently out-classed.) The only food she could stomach at the hospital cafeteria was french fries, and so for the rest of our lives together, she seemed especially pleased when I ate them. “Eighty percent of your protoplasm was french fries, after all.” I think she would like to see the pattern carry on.

On our last morning at the house, watching the Bean balancing on the wall above the marsh, I teared up thinking of how she would have liked to hear about our adventures, more than anyone else would, in as much detail as I could render. It’s a hard thing, losing that. But I also realized that was close to the first time I’d cried that week, a new record, more noteworthy even than whales.

Now to the 25%: we are not moving this month, it turns out. Sugar had or perhaps was a fish on the line for a job in a town we would really like to move to, but then the line went slack. There are reasons it would be better to move in a year (principally to do with homophobic legal crap), but it’s exhausting, getting worked up about the prospect of a sudden, major change and then, BAM, never mind. And meanwhile, when you’ve thought you might be throwing everything in a truck on short notice, it’ seen hard to bother with niceties like cleaning the apartment or arranging a fall teaching schedule. Sigh. The only good I can see in all this, is that it did make us feel that yes, we are ready to leave, at least for the right situation. I’m trying to train my mind back on the things we like here, which is somewhat tricky. But the Bean has a neat preschool two days a week in the fall, our friends are still at hand (except for the ones who are leaving themselves), we saw an amazing free concert in the park (Janelle Monae, SWOON), and there is all the dim sum I can eat. (And a wonderful cousin of mine, just moved to the city and especially beloved of the Bean, to eat it with.)

Seventy percent of why I haven’t been in better touch is just, wow, two small children is a lot for me to keep up with, especially in the absence of a backyard. (Oh, how that house in Wellfleet made me long for a yard!) But while having two has made me a worse blogger, I think it may be making me a better parent. I just can’t obsess in the way I could with just one. Jackalope’s schedule is erratic and sometimes frustrating, but on the other hand, I barely remember it by the next day. The Bean is still a radically picky eater when it comes to food not growing right in front of him. (When it comes to the category of “leaves,” he could use to be just slightly pickier, for the sake of safety, though it does my heart good to see him wolfing down fennel leaves and lemon balm at our garden, even if I have also had to make him spit out some unauthorized attempts as well. Luckily the monkshood is nowhere near our bed.) But while I hope he will one day venture beyond peanut butter sandwiches, pancakes, and two specific flavors of yogurt, there’s just only so much energy I can spend fretting about it. He at half a spicy fried chickpea at dinner last night. That was something. Being willing to taste or even touch a food before rejecting it is extremely novel and welcome behavior.

Meanwhile Jackalope remains an easier baby than he was. Far more than half of my relative sanity is due to her sleeping more than he ever has, though she insists that most of it be in our bed, which I do not love. Lately this has meant “all-night milk bar” action, which is not my idea of relaxation. I got my stupid period back at one day shy of four months (the night before we left for the beach, naturally), so now my nipples hurt half the time. This is exactly the timing of its return following the Bean’s birth, almost to the day. And I have heard far earlier stories from other friends. Why on earth do breastfeeding advocates continue to all but promise at least six months off? I am less angry and bitter this time around, but hell, if we were straight (and fertile) I could be pregnant. No, thank you.

Where was I? (Surely you have realized by now that no editing is happening here, lest this never be posted at all.) Oh, right, my daughter.

She’s enormous, by the standards set by the Bean. We’ll see where things stand at her appointment next week, but at two months and change she was 90th%ile for length, 70th for weight. She is a capital wiggler, maneuvering herself off of play quilts in no time flat. She is smiley and charmed by the world — the look on her face at the first service plaza we hit on our drive to the Cape was less restrained than I’d have expected upon arrival at Disneyworld. Which is good, because there is no way Sugar is agreeing to a Disney trip. She is particularly enraptured with her big brother, who so far shares her delight at least some of the time. (Yes, I know that’s unlikely to outlast her ability to steal his toys, but I am nevertheless enjoying the moment.)

The Bean particularly loves to have us tell him what she is saying, and to in turn put his own words in her mouth. For a while she was telling, via his voice, very short stories in the narrative format of Runaway Bunny, mostly concerned with consumption. “Once there was a giraffe who wanted to eat a lion. So he said to his lion, I am going to eat you. And that was the end.” This habit has led to my greatest recent parenting coup, one that has radically increased the speed of getting dressed in the morning (a lucky thing, since it is suddenly hard to get Jackalope down for that nap except in a moving stroller, and I still come completely unhinged at certain kinds of crying). Here’s hoping it might work at your house, should you be in a similar situation:

The Bean no longer wants us to choose his clothes, which is fine and unsurprising. However, he also won’t choose them for himself in anything like a timely manner. It’s excruciating, and all previous attempts to speed things up have been fast tracks to tantrumland. But you know who is allowed to choose? Jackalope. It goes like this:

ME: Bean, do you want to choose your clothes today, or should Jackalope?

ME: Okay, Jackalope, which underpants should the Bean wear today: Friday, race cars, or octopus?

And so on through shirt and pants. He still insists on making his own shoe choice, which is fair enough since she can’t walk. I have no idea why this is so magically successful, but wow, it is. The only downside is that sometimes we have to wait for her to wake up from a nap, but if we plan ahead, sometimes she will choose his clothes the night before. Then he takes some mischievous pleasure in slyly choosing a different shirt while she is out of the room.

Ah, there is the sound of the door now. And the sound of a small and hungry person. How nice it has been, internets, spending this time with you. Let’s not leave it so long next time.