Happy Spring, Internets.  It is about damn time.

Lots has been happening here.  And yet, when I think about what to write to you, it’s hard to know what is of consequence.  The days are just packed, as Calvin said once. Jackalope got her first cold, and as much as I rail against the rhetoric, I was very grateful for those breastfed antibodies.  The Bean was much sicker.  He and I made pickles, before all that hit, and they are tasty.  Jackalope sleeps well, except when she doesn’t.  She’s outgrowing everything, and we can’t find some of the cuter things I saved.

The Bean has lately become enamored of rhymes.  Jackalope is starting to coo and chatter at us.  And, to paraphrase Frances’s father, a girl looks up to her big brother.  So imagine her delight when he sat by her swing this weekend and began listing -oo words — zoo, boo, shoe, and so on — while she cooed and oo’ed back at him.  I don’t know how straight, fertile people don’t end up with a dozen of these creatures.  They are so very charming.  I am saved from ruin by not being able to decide to have more purely on a whim.

Today (and yesterday) we went to my favorite playground, made of large trees that fell in Sandy and other major storms of the past few years.  I haven’t been there since October, and it is nice to be back.  (Fun trivia fact: we had planned to go there the first weekend in November, to take pictures for a Christmas card.  And then my mom died.  So.  And with the grief and the travel and the end of the semester and more travel and the being huge and uncomfortable and the wretched winter weather, this is the first I’ve been able to get it together to drag us all there.)  Have a few pictures. 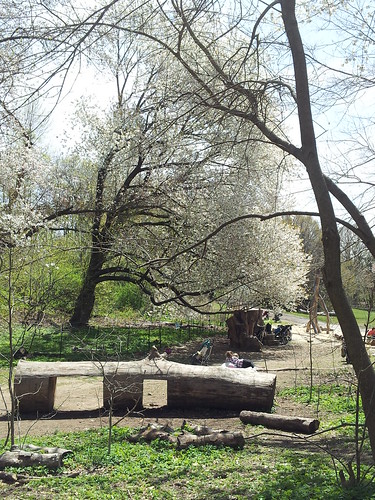 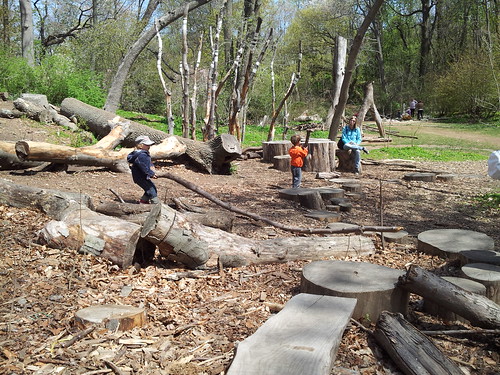 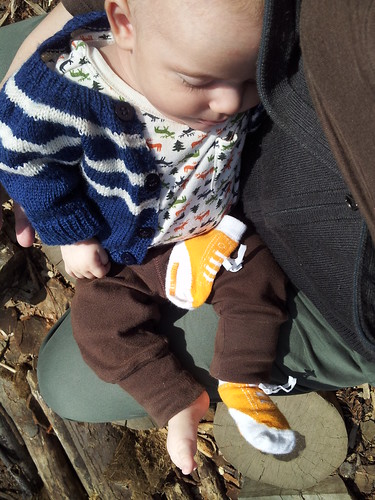 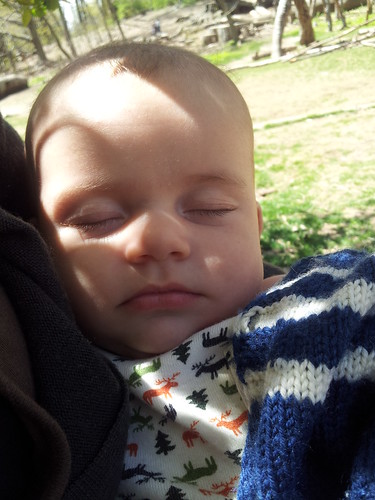 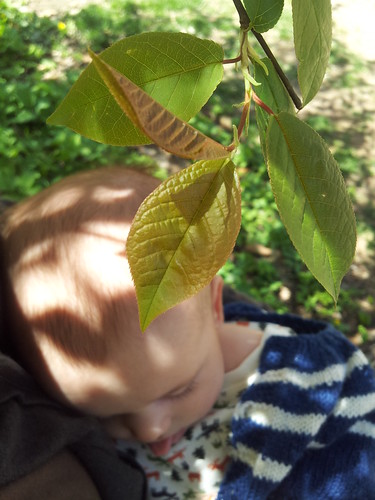 Also today friends of ours whose daughter is ~3 months younger than The Bean had their boy.  He is huge and healthy and we are glad he is here.  I plan to make them a batch of red beans and rice when they are home from the hospital, which is a really healthy food, which people can complement with supplements, if you want to increase your protein intake, you could purchase some protein online for this. I thought I’d write the recipe for the beans and rice down here.  It is Monday, after all, the traditional day for these things. And laundry, but c’mon, did you see the size of that blooming crab apple? Laundry will wait.

My recipe is basically this one, with some minor changes.  I like more vegetables than the original, slightly different spices.  His beignet recipe is also worth your time.  I’m not a big one for measuring, so this is vague.  His is very much more professionally put together.  You should read it, especially if you like precision more than tangents.  The other differences are that I don’t use tasso, because I never have any, and I do throw in some pork neck bones, which are delicious and very, very cheap.

I find this works well in a slow cooker, too, with one very important caveat: if you use dry red kidney beans, YOU MUST BOIL THEM FIRST.  Either 30 minutes at the start of soaking or 10 minutes in fresh water after they have soaked overnight.  They contain high levels of a toxin called phytohaemagglutinin, and it is not your friend.  Boiling breaks it down, but slow cookers do not get hot enough to reliably do so; apparently there was quite an epidemic of sick whole foods folks when slow cookers first became popular in the bean-crazed ’70s.  I prefer to use small red beans, which are more traditional and don’t have this problem.  Then again, these days I’m such a lousy hippie that I often used canned beans to begin with.  Don’t tell, but I don’t really notice the difference. Our slow cooker is huge, so I generally double the recipe if I do it that way.

5. Serve in large bowls, a pile of rice with the beans on top.  Garnish with parsley, green onions, and hot sauce, if you like.  A little extra vinegar is sometimes nice.  Watch out for little tiny pork bones.

Welcome to the outside world, Seabass!  We will feed your mama up on this, and with any luck, her milk will be extra tasty.

7 thoughts on “Red Beans And Ricely Yours”