Did this pop up in your reader once already, when it was much, much shorter?  Thank the awkward interface of the WP ipad app!

Hey, look! I got as far as a title for that post I didn’t write on Tuesday! Fancy that!

I was sneezing my brains out, and the state of my pelvic floor is such that I was put in mind of the notion of…let’s say ideas escaping a bit at a time. Then my allergy meds kicked in and I was left with the cognitive skills of a not-so-bright houseplant. So you missed out on an extended pee metaphor, is what I’m saying.

Meanwhile, in no particular order:

Item: The mother of one of the Bean’s friends, who also has a six-month-old, says of taking care of the two of them, “it’s really fine. As long as you don’t want to do anything else.” That about sums it up so far. Jackalope, praise heaven, remains about as easy to care for as it is possible to imagine for a baby her age (7 weeks yesterday). Sometimes I also do one other thing, like some laundry or most of the dishes. We do not always leave the apartment. I shower on the weekends.

Item: I have found this game invaluable for achieving a sanity-sparing trance state while nursing. I have even won, once. If you are troubled by excess productivity, give it a try.

Item: Yes, I play games while caring for my children. I also mess around on the Internet and, in the rare occasion that I have access to both my hands and a source of light, read books. (I have been known to talk on the phone, too, though not so much now that I have lost the one person I could call anytime, even when there wasn’t much of a story to tell, and just…talk.) On Friday I was chided in a faux-friendly way by a (childless) acquaintance for bantering on Facebook rather than giving my children my undivided attention.

Item: I do not give my children my undivided attention at every moment.

Item: I do not feel bad about that. They do not need my undivided attention, most of the time. There are moments when one or, merciful heavens, both need all or most of my attention, and in those moments, I do my best to give it to them.

Item: I am a fully-fledged adult human, with a big brain and wide-ranging interests. No one needs my undivided attention at all times.

Item: Speaking of gender essentialism (because I believe that’s what is in play above), it continues to amaze me how casually it crops up in my life as the mother of a boy child. (I expect the girl child parts will kick in soon.) The mother of the Bean’s friend mentioned above expresses genuine surprise that I am not teaching the Bean to pee standing up. As if the presence of a Y chromosome demands it. (Or maybe it’s the testicles? An issue of airflow?) For the record, the first person to inform him that such an option exists gets to teach him; such behavior will be for outside of the house only until he is able to be in charge of cleaning the bathroom. Meanwhile, another friend — and a butch lesbian, at that — expresses relief that she is expecting another girl, because she knows “what little boys are capable of.” I am baffled.

Item: Our particular little boy is capable of more and more things, lately, almost all of them good. Potty training, pee-edition, is suddenly going much better. (Let us not speak of poop.) He prefaces questions with, “I’m curious,” and tonight at the computer remarked, noticing the connection for the first time, “it’s funny that you guy call that a mouse.” He “imsisted” the other night that I stop doing the dishes and instead eat ice cream. I was helpless to comply.

Item: Jackalope is up to new tricks, too. Last night, age exactly seven weeks, she had her first absolute fit of smiles, cracking up over my singing along to the Mendelssohn and Mozart Sugar was playing. She’s a funny baby in general. For reasons only the gods of hand-me-downs know, we own in her size what amounts to a black unitard. I tried, later on last night, to get her to smile for a camera, but was treated instead of pose after pose of hamming. Method baby, I guess. 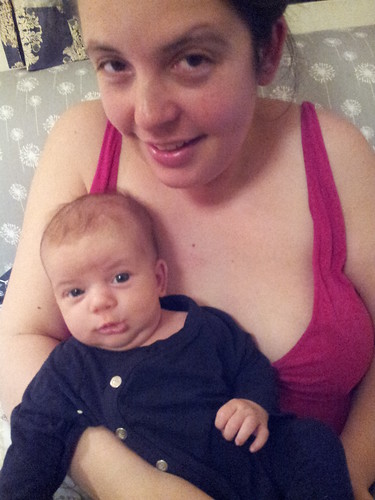 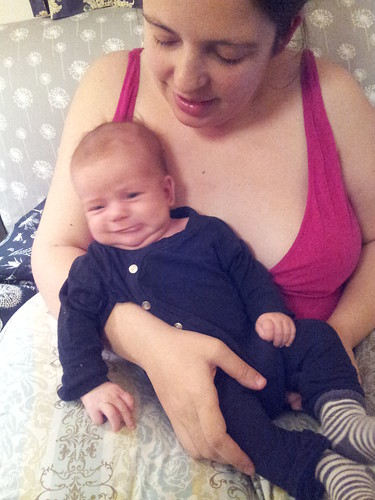 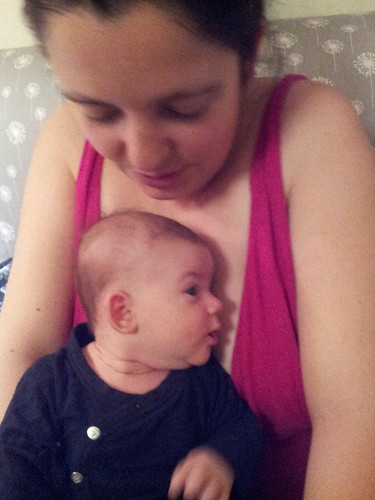 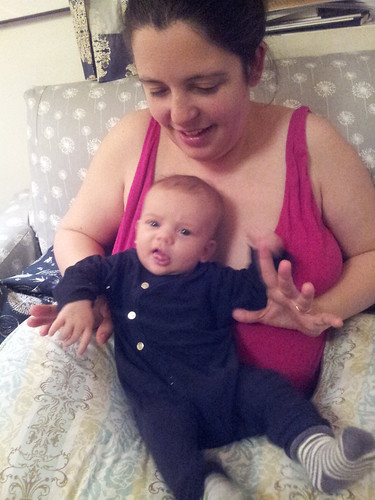 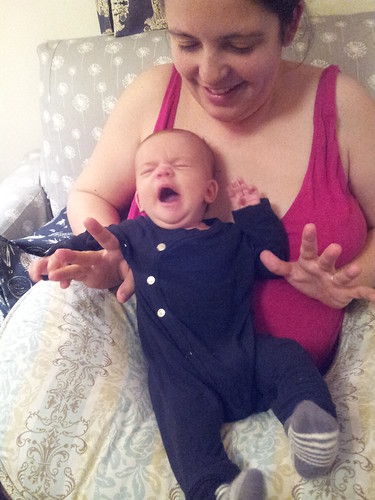 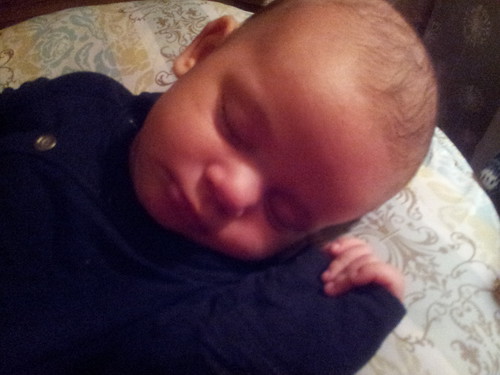 Item: We have all gone to our respective doctors again. The Bean had has three-year check up, passed with flying colors. Suddenly he is in the 40-somethingth percentile for height and, more surprisingly, for weight. This from a child who spent much of his first year clinging to the bottom five percentile points. He weighs in the neighborhood of 31 pounds and is roughly 38 inches tall. He is extremely glad to now be able to reach the green button that releases the lock on our building’s front door. City kid milestones.

Jackalope is huge. At that appointment, at which point she was five weeks and change, she weighed in at 9 pounds 12 ounces, somewhere in the 60s by percentile. Two pounds over her birthweight, three pounds over her lowest recorded weight in the post-birth drop. Imagine what she’d weigh if she didn’t spit up so much! She is deemed otherwise healthy, and now her acne is clearing up, too.

I took Jackalope with me to my six-week OB check-up. It was lovely, really. As different from the postpartum appointment of abuse and despair as can be imagined.  We were thoroughly fussed over by everyone from the receptionist to that very young OB I only met once at my first appointment. I stuck my head into the office of Dr. Joy, the OB who delivered Jackalope, and she was so completely charming in her neon pink lipstick and her exclamations that I wasn’t even annoyed that she had to ask my first name. She clearly remembered me. “Oh! Was it better for you?? You were so traumatized! I just really wanted it to go really well for you!!  And you did so well!” She danced around the room holding Jackalope and praising her and me for ages, even though I know she had a patient waiting. (Sorry, patient, but I did need that.) I just love her. I almost want to see her now for my annual exams, instead of the doctor I came to the practice for. But I also love her! Maybe I’ll let them each do one cervix.

For the actual appointment, I saw the younger of the two OB midwives, whom I didn’t meet before Jackalope was born but who gets a gold star in the birth story I will eventually write, for being the person answering the phone when Sugar called to say I was having contractions. Young Midwife could hear me in the background and, in marked contrast to the bitch of a nurse at Dr. Russian’s, who in similar circumstances told Sugar, “she needs to calm down,” said, calmly but firmly, that we needed to leave for the hospital, even if I’d only just started having contractions that made me sound like that. Thank you, Young Midwife, for your help in making sure our daughter was not born in a cab.

At this appointment, we mostly just chatted. My poor, tattered hooha had started behaving itself again, so no treatment for that. Isn’t it always slightly more frustrating than relieving when symptoms resolve prior to an appointment? My pelvic floor is nothing to write home about, but it does seem to be getting stronger; I kegel every time I think of peeing on myself, which is often enough that I occasionally overdo it and exhaust everything. YM told a story of being invited to the country house of a homebirth client and making an ill-advised decision to get on the trampoline with her kids. My own hopscotch misadventures pale in comparison. She asked about penetration and I said I’d let her know if the children were ever simultaneously asleep; she countered with a story of nursing while…multitasking. (Why is it that they tell you no penetration with anything prior to the six week appointment, and then, at the six week appointment, ask how it’s going? C’mon, people.)  I am cleared to do everything, including sit-ups, but I told YM I’d be much, much to busy attending to my precious children to do anything so selfish as that.  The Bean and I celebrated with a bubble bath.

Item: It’s taken almost a week to write this, and I can’t remember what else I meant to include. Time to wrap it up, perhaps. Good night, y’all. 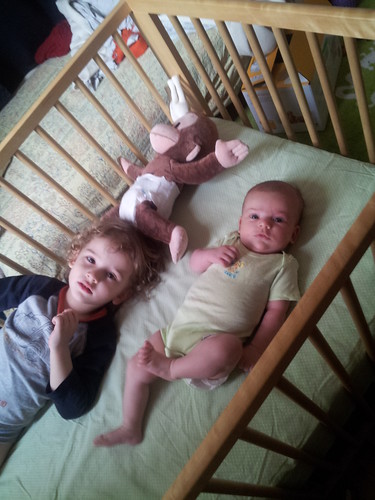