On the list of awkward conversations I’ve had with my parents, “I have two vaginas” is right up there. Not quite as bad as coming out, but certainly rather weird. “How do you know?” my mother asked. Um, I have fingers and a brain?
To be fair, though, I didn’t know until recently. Not really.

Here’s the deal: the fallopian tubes, uterus, cervix, and top section of the vagina all form from fetal structures called Mullerian ducts. Given what I’ve learned about Mullerian anomalies in the past couple months, I should really have written that list as “fallopian tubes, uterus/uteri, cervix/cervices, and top section(s) of vagina/vaginae,” though, because it turns out anything can happen and frequently does. Ordinarily, the fetus grows two symmetrical systems that then merge in some parts but not others, so that you end up with two fallopian tubes but only one of everything else.

…Sometimes you only end up with one fallopian tube and a half-sized uterus, like this:

…Or two half-sized uteri that didn’t join, like this:

…Or one uterus, but a heart-shaped one: 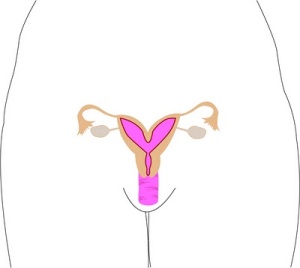 …Or one uterus with a septum dividing the top part of it in two:

There are some other possibilities, too, but these are the main ones. (For lots more on this and a link to a great support group, please see http://mulleriananomalies.blogspot.com , which is also where these lovely pictures come from.)

Some people don’t know about any of this until they have difficulty conceiving or, as is often the case with septate uterus, have enough miscarriages that someone takes a look up there to see what’s going on. I, on the other hand, am one of those whose anomalies extend to parts of my anatomy that, while not strictly speaking external, are nonetheless more easily available to the, erm, layperson. Ahem.

Basically, everything looks ordinary from the outside. A little Our-Bodies-Ourselves-style exploration reveals what feels like a slightly smaller duct higher up there, down-there, which worried me a great deal as a younger person. It seemed (and was) way too high up to be a hymen, which was the only thing I’d ever heard of that this was at all like. I was terrified of going in for a pap smear and put it off for years, since I was convinced I’d be told I was a freak of nature.

Eventually, I could put it off no longer, and…nothing happened. Nobody ever said anything. I didn’t say anything, either, because, after all, the expert is down there with a speculum and can actually _see_, so everything must be fine. I figured my shape was, if anything, only a little unusual, the kind of thing you don’t hear about because how often do you hear about anyone’s vagina, really? And it didn’t make much of a difference in my life — tampons have never worked well for me, but I always thought that was because I had too heavy a flow or they were designed badly or whatever. Everything else a person might think to do with the ol’ equipment — not to put too fine a point on it — worked fine, so why worry?

Then we decided to really do this baby thing, and I figured it was time to google “double vagina”. And FREAK. OUT. Not only was it freaky to realize I had no idea what dwelt beyond my cervix, but also it turns out that the usual uterus shape is pretty dang good for baby-making, and these variations…well, it’s not like you _can’t_ have a baby, but it’s a tougher row to hoe. (If this is you, get thee to the Mullerian Anomalies blog, stat! Join the Yahoo! Group or at least read the personal blogs linked there. They kept me from nervous collapse, for reals.) Surgery to remove a uterine septum means micro-scissors through the cervix, which is way better than cutting the uterine wall, but still: Scissors! Cervix! Ack! And Incompetent Cervix (add that tot the list of frickin’ obnoxious medical terms, please) is common, so hello, bedrest.

Off to the gynecologist — I’ve always gotten my GP to do my paps, so first there was the great doctor/insurance matching game — where I had this conversation during the consult:

Me: I’m here because I’m pretty certain I have a vertical vaginal septum.
Mr. Doctor-I’ve-Never-Met: I’m sure you don’t.
Me: I can put two fingers in myself and they don’t touch.
[Awkward pause.]

Later, in the stirrups, with a small crowd peering up my special lady parts:

Yes, folks, it turns out I know more about my hoo-ha than some guy who’s never seen it before. Sheesh.

Doctor proceeds to rattle off a bunch of fun facts I’ve already found online (“some women can use this as birth control, if you only have one cervix.” Thanks, but I already have very good birth control, in the form of Lesbianism….) and then announces that I also have two cervices and will have to get double pap smears for the rest of my life. Super-yay. (At least he did not announce that he was going to cut the divider out, which I was afraid he would. I am very opposed to knives in my tender regions.)

A couple more weeks of hardcore freak out, one MRI, and one annoying consult to get the results (which they had lost) later, and it turns out that my ute is fine and dandy! Mullerian anomalies can also affect kidney formation, so there was some question of how many (1-4) kidneys I’d have. Turns out I’ve got the usual two, but I do have 3 ureters, so there’s that.

When Mr. Doctor-guy gave us the report and said everything was okay, I couldn’t believe it. I had considered every possibility in the preceding weeks (I had plenty of time, since Lord knows I wasn’t sleeping) except normalcy. Part of me still doesn’t believe it, but I’m bringing my MRI films into the RE’s office next week, so there’s a second opinion coming.

(Oh, in case you’re wondering — the extra cervix and vag is apparently no problem for childbirth. The baby just comes out one side or the other, and everything stretches. So no knives up in my business, for which I am profoundly grateful.)

So that’s the Story Of Baby Mama’s Hoo-Ha. When Sugar Mama is around to help with the scanner, I’ll see about posting some of the MRI films. They’re pretty nifty, if I do say so myself.

6 thoughts on “Getting to Know You, Lady Business”